Gary is a native of Walpole MA where he went to high school and made Varsity as a starting pitcher in his sophomore year.  After leading Walpole to the MIAA division 1 semifinals his senior year, he signed with division 1 newcomers the University of Hartford.  During his time at Hartford, Gary had the good fortune to play both with and against multiple major league baseball players and future hall of famers, including roommate Jeff Bagwell.  During the summer of his Sophomore year at Hartford, he spent a brief time in the Cape Cod baseball league playing for the Chatham A’s before succumbing to a shoulder injury.  After turning down an offer to play in the Canadian baseball league to enter the MLB draft, his professional playing dream ended.  When he realized his passion for the game hadn’t stopped he turned to coaching.His coaching experience is both wide and varied.  He has coached at every level from T-ball all the way to high school.  He began his coaching career at Mansfield high school in the Spring of 1991, where he took the Junior Varsity coaching job.  The next year he was promoted to the Varsity after going 15-5 as the head coach of the JV.  After coaching Mansfield for 4 years, he realized he had more to offer and wanted to reach a larger group of students.  He started working as a pitching instructor in the spring of 2001 at Mo Vaughn’s Hit Dog Training Center in Stoughton. In 2004 he went to work at a larger facility in Waltham called Baseball Unlimited.  There he not only honed his teaching skills as a pitching instructor, but also began to learn the skill of becoming a hitting instructor as well.  Working closely with the 2 owners, who both spent brief stints with Major league baseball, he was able to join the two arts of hitting and pitching and developed his own philosophy.  After his 2 children were born, it was time to move closer to home where Gary started working here at the Cage in Marion.  For the better part of the last 8 years he has been helping students in this area develop into high school and college all stars. 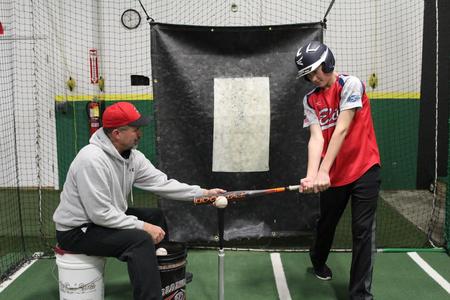